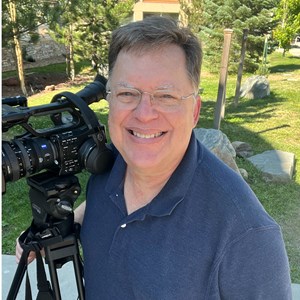 Back in the early 1970’s, “Bobby” picked up his father’s Kodak Xl33 Super 8
camera, lined up his toys, and animated them battling each other. An
A/V Club nerd from the beginning who kidded himself into thinking that he
could, one day, be a veterinarian, realizing later that he couldn’t do that
'science thing', but that he could do that creative thing.

In college, he studied to be a TV reporter, got an internship at his hometown TV station in Shreveport, LA and once he sat down to write a script for broadcast, the blank stare at the typewriter keys and writer’s block gave him an epiphany -- “I’ve decided to become a TV Photographer!”

Bob spent 25 years as a television photojournalist for news stations in Shreveport, New Orleans and Denver. He is currently
the Media Production Specialist for the City of Golden, Colorado, where he has worked since 2010. Bob’s duties include managing, scheduling, and producing content for the city’s PEG channel, GCO.tv, producing video projects for public and in-house use, directing City Council meetings for broadcast, and keeping the citizens informed through Golden’s streaming channel and the various social media outlets. Bob is the winner of multiple broadcast news, photography, and editing awards, including 2 Emmys and an Edward R. Murrow Award.