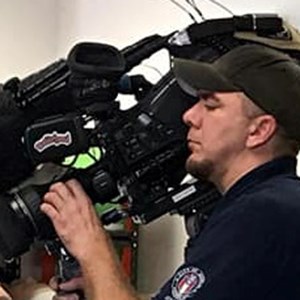 Jonathan Uhl (pronounced “yule”) is an award-winning television photojournalist, editor, and producer with 25 years of broadcast experience in local, national news, and municipal programming. He brings to his work an abiding concern for telling visual stories through ordinary people, natural sound, great lighting, and compelling videography.

Uhl has garnered honors as well from the Society of Professional Journalists (SPJ) and earned various government, state, and national awards for his craft including a few NATOA’s, Edward R Murrow, and a DuPont award.

As a photojournalist, Uhl shot stories for national, and international television organizations and news programs.

Historic moments such as the Space Shuttle Columbia accident, 9-11, Operation Iraqi Freedom, and loads of mother nature's furry such as flooding, ice, hurricanes Katrina, and more, or Tornados that seem to drop onto the Oklahoma landscape frequently. Keeping that abiding concern for telling visual stories through ordinary people, natural sound, great lighting, and compelling videography on very tight deadlines.

In his off time, Uhl enjoys being with family and being a part-time musician who you can catch playing in a few local Austin bands. Jonathan and his wife Andrea enjoy spending time with their kids Vala and Avry, 2 dogs Betamax and Dreyfus, and Clouseau the cat. Uhl joined the City of Austin approximately 12 years ago as a Senior Videographer/Producer. His motto is Emmy Natoa NPPA all day every day.